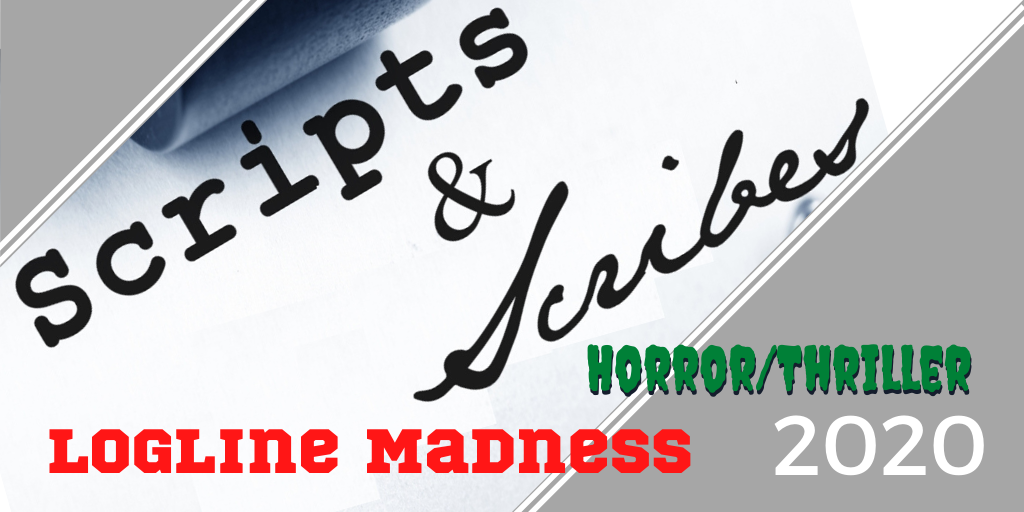 A few loglines were missing required information (title, author, genre, medium, etc.) or the same author submitted multiple loglines and as stipulated by the rules of the competition, and may have been disqualified.

Below are the loglines designated as the top twenty-four (24) in the Drama genre by the selection committee and online vote. The twelve (12) loglines chosen to move on to the Semi-Final round, as determined by the judge, are listed at the bottom.

Judge’s Feedback: This is an inventive showcase of using IP and giving it a contemporary spin while keeping the spirit of the characters alive.

2) Don’t Think Bad Thoughts by Zachary Rowell & Danika McWaid (Feature) – Set in the near future, where humans must take daily medication to avoid disturbing deaths, a group of wealthy teens find themselves stranded in the woods without their pills.

Judge’s Feedback: Unless the “near future” has more to do with the script besides people taking pills, you can get rid of that description. Otherwise, this is a high concept logline with a cool ticking clock element.

3) Incursion by S. Rhallin (TV) – In 1974, a group of scientists sent a message to the stars, welcoming other sentient beings to visit our world. It’s a decision humankind may not live to regret.

Judge’s Feedback: Cool idea, but logline is a bit unclear. Should it be humankind may live to regret it? As is, doesn’t seem like there are stakes if humans aren’t alive to see what happens. Perhaps I’m reading it wrong.

4) AHH!-CAPELLA: Featuring the Music of NSYNC by Bryant Jen (Feature) – A fractured, rag-tag a capella group retreats to a cabin in the woods to rehearse for the big Voice Wars competition finale, only to encounter a monster that’s attracted to perfect harmony and NSYNC music.

Judge’s Feedback: Bold concept, but the tone is a bit unclear from the logline. Feels comedy-heavy. Another horror element should be added if this is horror/comedy.

5) Wish List by Joseph Fattal (Feature) – When a technophobic Amazon delivery guy is ambushed in Mexico by a group of gangsters who mistake him for a drug mule, he must survive using only the packages inside his van.

Judge’s Feedback: The tone is unclear. Is it comedy because he’s a technophobe who has to use technology? I’m more interested in the action (with comedy) version where an Amazon employee must use whatever is at his disposal to defeat the bad guys.

6) Log by Alison Parker (Feature) – A weekend of debauchery turns to terror for a group of friends staying at an old lumberjack camp when a bloodthirsty log springs to life and embarks on a murderous rampage.

Judge’s Feedback: I have to read the scary log script! Creative use of human vs nature.

7) Vinyl by Adam Santa Cruz (Feature) – A grieving young man comes into possession of a seemingly harmless record player after the sudden suicide of his best friend, but a haunting melody turns his life into a nightmare.

Judge’s Feedback: The haunted “thing” is a bit familiar, and I’d like to connect the dots of the young man receiving the record player. Was he chosen, or is it coincidence?

8) Humboldt Cut by Allison Mick (Feature) – In the forest where her grandfather was murdered 50 years ago, a suicidal woman leads a search party for her missing brother. In the woods she battles nature, mental illness, and a supernatural evil none of them could have imagined.

Judge’s Feedback:  This feels like the protagonist is dealing with a lot, which might overcomplicate the journey. Try simplifying it.

9) Theater Is Dead by Asia Ponder (Feature) – The bond of sisterhood is tested when a dysfunctional sorority meets at a theater and finds all of their secrets exposed on the big screen.

Judge’s Feedback:  Really intriguing start, but needs another sentence. Where does it go once their secrets are exposed?

10) Integrity by Cadance Bell (Feature) – As the world heralds trials of human teleportation, a beggared family dread that the father who went through is not the thing that came back.

11) Help Me by Ethan Frome (Feature) – When a virtual personal trainer begins in-person sessions, she discovers a sinister scheme targeting women in her neighborhood.

Judge’s Feedback:  Interesting second half, but why does it matter that she was once a virtual PT? Could just be a personal trainer with a new client discovers something sinister.

12) Dark Ages by Guy Patton (Feature) – A former soldier, desperate to forget her dark past, must lead a band of survivors when a bioweapon that erases memory turns families into strangers and civilized people into monsters.

Judge’s Feedback:  The protagonist almost distracts from a cool twist of this weapon turning families into strangers. I think there is a more grounded, “every-person” version of this without the familiar traumatized soldier character.

13) My Only Sunshine by Jessica Landry (Feature) – After her father’s death, a sheltered young girl learns the horrifying truth about her overbearing mother and the role their family farm plays in a world consumed by an insatiable hunger.

14) The Killer Within by James Ward Breen (Feature) – A small town cop must hack through local paranoia, city homicide and his own guilt ridden past to find an escaped prisoner before he attacks the sole witness: his five year old son.

Judge’s Feedback:  This one has a lot going on, including the familiar “guilt ridden past”. Is there a twist on the flawed cop character?

15) Unidos by PJ Edwards (Feature) – Stuck in school while serving detention, a misfit group of Latinx teens fight for their lives against a savage yet benevolent bogeyman.

Judge’s Feedback:  Tone is unclear. Stakes need to be elevated. Are they literally stuck there with no escape, or can they simply leave the school?

16) Mom Was A Killer by Rochelle Krause (Feature) – When two estranged siblings discover that their elderly mom was a Cold War spy, together they fight to stay alive when Mom’s fiercest adversary returns for revenge.

Judge’s Feedback: Cool concept, though is the adversary also elderly and does that lessen the stakes? Lean a bit more into what the stakes are to clean this one up.

17) Made to Order by Ryan Murray (Feature) – In an attempt to bond over the summer, a family of three must go from operating an abandoned restaurant to surviving the sadistic previous owners.

Judge’s Feedback:  Intriguing, but not really sure what the movie is. Is the family caught in a rut and this is an attempt to get closer? Why is the restaurant abandoned and why would they want to operate it? Are the previous owners supernatural, or is this meant to be grounded?

18) Hide Me Among the Graves by Tal Gantz (Feature) – When a physics student discovers that his own body was found in a 19th century grave, he must solve a sinister time-travel mystery before his fate catches up with him.

Judge’s Feedback:  Cool start. If the intention is for it skew horror, what else about this world is evil or sinister? It could just be a time-travel mystery otherwise.

19) Namahage by Travis Seppala (TV) – After her American husband is killed in an accident, a Japanese woman must save his children from a pack of mythological demons.

Judge’s Feedback: Does their nationality have something to do with the story? Instead of doing that, mention that Namahage is rooted in Japanese folklore.

20) Stillwater Gardens by Cecil Green (TV) – A frustrated detective on disability is forced to move in with his mother at a 55 and over community, but when he arrives he learns that a serial killer has been victimizing the residents undetected for several months.

Judge’s Feedback: Good start, but want a bit more context to this setup. Are there killings, people missing, elderly abuse? Victimizing is vague in this scenario.

21) Pages by Matthew W. Martinez (Feature) – Two precocious middle-school amateur super sleuths discover several clues in a series of public library books that lead them towards the discovery of a missing local teen and the identity of her captor.

Judge’s Feedback: Other than a bit too much description, this is a strong logline. “Amateur super” feels like opposing ideas.

22) All the Evil by Joel Justin Joseph (TV) – Haunted by the disappearance of his childhood friend, a true crime novelist must piece together the puzzle behind an urban legend from his youth, a masked boogeyman involved in a series of grisly drownings.

Judge’s Feedback:  Getting Zodiac vibes from this one. Is there a better description for the drownings? I don’t think of them as being “girsly”.

23) Spirits by Frank Romano (Feature) – A haunted woman knowingly aides in the capture of a ghost, only to find herself in a race to rescue the spirit from the clutches of a secret society.

Judge’s Feedback: I’m not sure what the journey is. The woman helps capture, but then has to rescue the ghost. Is she a part of the secret society?

24) Soul Mates by Angela Jorgensen (TV) – A love triangle turns murderous when a medium, a widower, and the ghost of his dead wife find themselves entangled together.

Judge’s Feedback:  Not really sure what the “journey” is. Is the wife recently deceased? Are the widower and medium together?

The loglines selected as the best 12 and moving on to the Semi-Final Round:

The Semi-Final round loglines will be announced in forthcoming articles next week. Thank you to all writers who submitted loglines and congratulations to those moving on to the next round of the competition!